The following blog post was submitted by Brenda Boitson, a 26 year-old widow, writer, and speaker who resides in Lancaster, Pennyslvania.  Her husband, Kevin, lost his battle to angiosarcoma at the age of 36 on October 28, 2008.  Brenda detailed their journey through his disease at http://www.theboitsons.info and now continues to blog about widowhood at http://www.crazywidow.info.  She advocates locally for sarcoma and grief awareness while working full time and attending school for business.

When I first walked through the doors of Johns Hopkins Hospital, one late night in August 2008, I was uncertain, fearful, and worried beyond belief.  My husband of 1.5 years had arrived just a few minutes before me via emergency ambulance transport.  He was breathing only thanks to life support, and we still had no answers on the undiagnosed cancerous tumor that was growing in his chest. 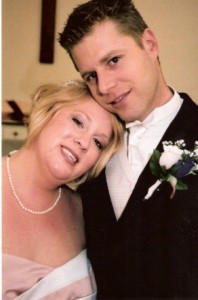 Brenda and Kevin Boitson at their wedding

Within minutes, many of my fears were parlayed as the staff at Hopkins took the time to sit me down, walk me through all the tests they were prepared to perform, what they knew, what they didn’t know, and how I could help.  I was assured by their swiftness and their care for not only my husband, but for me as well.  I curled up in the tiny waiting room of the old part of the hospital, and waited through the night for more answers.

For the next 34 days, my husband and I would make Johns Hopkins our home, our community, our safe haven.  All in all, Kevin spent 45 days straight in the hospital, first beginning at our community hospital in Lancaster, Pennsylvania, and the rest at Johns Hopkins.  It was ultimately where Kevin spent his last night, just 47 days after being discharged from Hopkins the first time.

While there, however, the doctors, nurses, and support staff made our life amazingly comfortable for the situation which we were in.  Kevin was able to be diagnosed with a rare angiosarcoma tumor thanks to the amazing and exclusive Sarcoma team, which was led by Dr. Katherine Thornton, the former head of the Sarcoma department at Johns Hopkins hospital.  Kevin’s nurses became our best friends and our go-to people for anything we needed.  They made a miracle occur in Kevin, by lifting his spirits, and giving him more reasons to fight for his life.

He was never expected to leave Johns Hopkins and actually go home.  With the staff’s encouragement however, Kevin went from being bed bound to walking laps on the Kimmel Cancer Center’s floors, within days.  He was determined to make it home, and they were right behind him with every step.  When we were able to be discharged, after a successful first round of chemotherapy to minimize his tumor, we felt as if we were winning the battle.

Despite the fact that the angiosarcoma was smarter than its treatment, everything was done that could be done for Kevin while he was in the care of Hopkins’ staff.  Dr. Thornton gave us hope where most doctors would have said “no way, you’re dead.”  She gave Kevin treatment in hope of putting the cancer at bay long enough to live his life.  She encouraged the surgeons to consider radical reattachment of his esophagus post-chemotherapy, since early in our Hopkins stay his esophagus was removed due to the aggressiveness of the tumor.  We were given every option possible, and were offered opportunities to fight for his life, despite minimal odds.

Johns Hopkins treated Kevin with the care beyond our expectations.  He was family to the staff.  I have never before experienced such a close knit community of people who will fight for a life beyond what the statistics say.  The attention that was given to us was simply astounding and beautiful.  We felt at home in a strange city, where we had no family nearby.  In the times between family visits, the staff helped us make the hospital a home.  We brought in juices for Kevin to enjoy, the Wii to get him up and active once he was feeling more energetic, and plastered the room with posters to encourage Kevin of better times ahead.  The positivity that flowed around us was phenomenal.

Resident Kendra Harris was one of the biggest beacons of light during our stay.  We built a friendship with her, and she held our hands through the many tight moments where we thought Kevin may not make it another hour.  She helped us to fight for a life that was worth living, despite the disease that was taking Kevin.

John Hopkins was our miracle, and was given to us in a most amazing way.  I can only thank them for giving Kevin nearly four months with a disease that should have taken him in one.  They gave us time, hope, and opportunity.  Thank you for this gift.

Remembering Kevin Boitson, 4.1 out of 5 based on 11 ratings