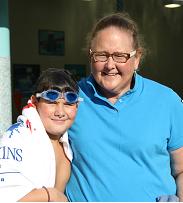 Harry and his team captain, Annie

When former Olympian Patrick Kennedy fired the starter gun yesterday morning to officially begin the Swim Across America Baltimore event, I nervously jumped in a 50 meter lane at Meadowbrook Aquatic Center, and started my one mile swim journey. I’d never done anything like it before, and there were a few moments – around lap 8 - when I considered getting out of the pool. But, given why I was really swimming on a chilly Sunday morning in September – to help raise funds for cancer research at the Johns Hopkins Kimmel Cancer Center - I thought the challenge was worth it. After all, my mother died of cancer, as did my grandmother, and I have close friends who have lost loved ones to the disease. Then, there are the patients I’ve met as part of my work here at the Cancer Center – people I’ve grown to care about deeply, who are courageous and inspiring.

So, I swam. So did my eleven-year-old son, Harry. I watched as he held his own among accomplished swimmers and then cheered on others – like popular radio DJ Jackson Blue. I was thrilled when Harry told me after the swim: "I’ve really learned to have a greater appreciation for Hopkins and cancer research."  Wow. What more could a mother (and PR person) want!

Then, there were the Olympians. Yes, they swam and yes, they’re really good and really fast! I just hope I can remember Craig Beardsley’s freestyle form the next time I’m in the water. But, that’s not what really impressed me about them. Instead, it was their humble attitude to help a great cause.  Each of them, as former and current champions, lends a high level of swim celebrity cache, no doubt about it. But, when they spent their Saturday evening with parents and children on our pediatric oncology inpatient unit, it was all about the kids. I was honored to be with them and struck by their selfless contributions of their talent and accomplishments.

How many “waves” did we make?  More than $400,000 thanks to dedicated teams of swimmers, donors, corporations and cancer survivors. Read more about the Swim Across America Lab at Johns Hopkins. 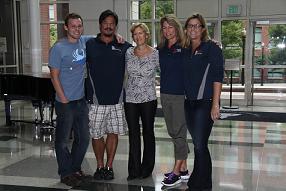