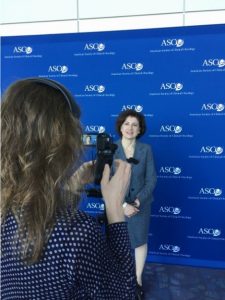 Immunotherapy expert, Suzanne Topalian, M.D., delivered a presentation to a standing room only crowd at the 2016 American Society of Clinical Oncology (#ASCO16) regarding new directions in scientists’ search for biomarkers that identify patients and tumor types most likely to respond to immunotherapy drugs. Among the approaches is an immunohistochemistry test for the protein PD-L1, which is found on the surface of cancer cells. PD-L1 binds with its partner, PD-1, a protein found on immune cells, to create a chemical “handshake” that blocks the immune system from identifying and killing cancer cells. Several immunotherapy drugs against PD-1 or PD-L1, called “immune checkpoint blockers,” aim to disrupt this chemical connection. A chemical test performed on biopsy specimens identifies patients whose tumor cells are studded with the PD-L1 protein and may be more likely to respond to checkpoint blocking drugs.  However, there are still many patients whose tumor test for the PD-L1 protein are negative and can respond to the drugs. “This is a complex biomarker,” said Topalian, associate director for the Bloomberg-Kimmel Institute for Cancer Immunotherapy. “There are different interpretations and scoring of the commercially available tests and other tests in development, and more study is needed.”

Another response-predicting biomarker targets mutations in DNA mismatch repair genes found in cancer cells. The connection between the mismatch repair gene mutations and response to the immunotherapy drug pembrolizumab (anti-PD-1) was first described at last year’s ASCO meeting. From that research, scientists at the Kimmel Cancer Center showed that patients whose tumors have these mutations (about 10-15 percent of colorectal cancers and 2-4 percent of other cancer types) are more likely to respond to pembrolizumab. Topalian said last year’s data are holding up and tumor responses occur in about 50 percent or more of patients with these mutations.

Finally, scientists have some of the first evidence, based on data presented earlier this year by Topalian and colleagues at the Fred Hutchinson Cancer Research Center, that patients who have virus-linked skin cancer called Merkel cell carcinoma may also respond well to receiving the immunotherapy drug pembrolizumab (anti-PD-1) as their first therapy. Additional data presented by Howard Kaufman from Rutgers at #ASCO16, showed that among 88 patients with this rare but aggressive form of skin cancer, 32 percent of them had significant tumor regressions after receiving an immunotherapy drug called avelumab (anti-PD-L1), and most of the responses were ongoing at the point of the data’s analysis. Patients who had had two or more previous therapies did not respond as well as those who had only one round of chemotherapy. Taking this and the previous study into context, Topalian noted that these two immunotherapy drugs target the same pathway and seem to mediate regressions in advanced Merkel cell cancers. She said there may be more of an advantage in using these drugs in the first line of therapy for these cancers, however, more observation of patients and additional studies will be needed to provide evidence. For Merkel cell carcinoma, a rare cancer that is classified as an orphan disease, Topalian added, “these two national and global studies highlight the importance of networking centers.”