Can Magnolia Help Break the Link Between Obesity and Breast Cancer?

--This post was written by freelance writer Becky Ham.

A compound made from the tree’s bark shows promise against tumors spurred by the leptin hormone.

Stand under the glossy green canopy of a southern magnolia in full bloom, and you’ll be dazzled by this queen tree’s show of hundreds of highly perfumed ivory blossoms, each the size of a teacup. It’s a stunning sight, but for centuries, Magnolia grandiflora has been known for more than its pretty face. The tree contains a pharmacopeia of sorts, yielding chemical compounds that have been used to treat everything from anxiety to heart attack.

Dipali Sharma, M.S., Ph.D., an associate professor of oncology at the Sidney Kimmel Comprehensive Cancer Center, thinks it may be time to add some breast cancers to this list of ailments. With her team at Johns Hopkins, Sharma is testing a magnolia compound called honokiol that seems to slow the growth of breast cancers fueled by an excess of leptin, a hormone closely connected with obesity.

Dipali and her colleagues have turned to honokiol after many years of studying the complicated role that leptin plays in breast cancer—and the role of obesity as a risk factor in many cancers. The well-known Million Woman study conducted through the University of Oxford suggested that about half the cancers in postmenopausal women in the United Kingdom can be attributed to obesity. Other studies have found that women at the highest body-mass index (BMI) levels have double the death rate from breast cancer, compared to those in the lowest BMI tier.

With nearly two-thirds of U.S. adults overweight or obese, according to U.S. Centers for Disease Control and Prevention, it’s a cancer risk factor that is poised to become “a very significant medical problem,” Sharma says. “Developing a preventive and therapeutic strategy for cancer in the obese state is extremely important.” 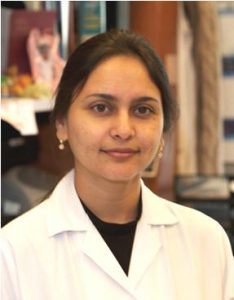 Leptin is sometimes called the “starvation hormone,” although its role in the body is much more complicated. It is made by fat cells, and helps to regulate the body’s energy stores by suppressing hunger. People who are obese make more leptin because they have a higher percentage of body fat, but their bodies appear to be resistant to this hunger-inhibiting signal.

Unfortunately, the abnormal increased flow of leptin can trigger a variety of other changes in the body. Sharma and others have shown that leptin and its latch-like receptors on the surfaces of cells are overabundant in breast cancer cells, compared to normal breast cells. Their studies demonstrate that hyperactive leptin signaling by these cells causes the cancer cells to multiply and invade tissue, and spurs the growth of the blood vessels that feed tumors.

“We learned that leptin-induced tumors quickly learn to evade all the usual biological checkpoints that have been put in place to keep the tumors from growing and spreading fast,” says Sharma. Leptin helps the tumor cells make a critical change in their shape and mobility, she explains, “and after achieving this state, a tumor cell becomes poised to migrate and invade and transition from a primary, non-invasive tumor to an invasive tumor.”

The Johns Hopkins scientists realized that their results could help explain why advanced grade and stage cancers, including those that spread to the lymph nodes, are more prevalent in obese women with invasive breast cancer. So they set out to find a way to quiet leptin’s hyperactive signaling in these tumors.

Magnolia’s medical record is a long one, especially in places like China, Japan and the Korean peninsula. Records from China show that magnolia bark, called houpu, was used as early as 100 A.D. to treat digestion problems and breathing ailments such as asthma. The bark, cones and leaves from a variety of Magnolia species are taken in their whole form, as extracts or powders, or most often brewed into a herbal tea. In traditional Asian medicine, magnolia is prescribed as an anti-inflammatory drug, an anti-anxiety medicine, a blood thinner, and yes—an anticancer agent.

The chemical compound called honokiol, extracted from magnolia seed cones, appears to be one of a handful of biologically active ingredients in the magnolia plant. Researchers have tested honokiol in cells grown in the lab and in animals, and confirmed that the compound does have an array of medicinal properties. In the 1990s, the Emory University lab of cancer specialist Jack Arbiser developed new ways to purify the compound, leading to a flurry of studies in his lab testing honokiol’s anticancer properties against lymphocytic leukemia and myeloma, melanoma, breast and prostate cancers.

When Sharma and her colleagues began the search for a biologically active compound that would have anticancer activity and could shut down the leptin signaling network, honokiol leapt to the top of their list. It’s a small molecule, which makes it easier for the body’s cells to interact with and absorb. It doesn’t appear to be toxic except in very high doses, and it isn’t part of the hormone family that includes estrogen. This last point is important, says Sharma, because it means honokiol could “be used to treat estrogen-receptor (ER) positive as well as estrogen-receptor negative breast cancers.”

In two studies (here and here) published last year in the journal Oncotarget, Sharma and her colleagues put honokiol under renewed scrutiny, first examining the effects of the compound on breast cancer cells grown in the lab. They discovered that honokiol can block the transformation and activation of some of the key molecules within leptin’s signaling network in these cells—most notably a signaling pathway that includes some well-known cancer-related proteins.

The researchers uncovered an especially intriguing role for a microRNA regulator called miR-34a. MicroRNAs are tiny snippets of genetic material that help to regulate how certain protein-coding genes are turned on and off. In a handful of other studies of miR-34a, scientists have identified the microRNA as an important tumor suppressor that is weakened in aggressive breast tumors. Now, for the first time the Johns Hopkins research team has shown that honokiol helps to keep miR-34a active and able to suppress some of the other cancer-linked proteins in the leptin network.

Sharma and her colleagues then fed some mice a high fat diet and watched their leptin levels rise, compared to those in mice on a normal diet. Breast tumors grown in the obese, hyper-leptin mice had low levels of the protective miR-34a, they soon discovered, but these levels rose when the mice were fed doses of honokiol. Over four weeks of treatment, these tumors grew to be significantly smaller in obese mice treated with honokiol, to about the half the size of the tumors in untreated obese mice.

The link between obesity, leptin and breast cancer has been strengthened by these and other studies. But Sharma says the findings haven’t yet changed how breast cancer patients are diagnosed or treated. “Currently, clinicians do not distinguish between leptin-induced or non-induced breast cancers,” she explains. “It’s not the usual clinical practice to check a patient for leptin or leptin receptor levels.”

She thinks the data collected by her lab and others will alter this practice in the future, especially since leptin signaling could affect how well standard breast cancer therapies work. Some studies suggest, for instance, that breast cancer cells that have exposed to high levels of leptin over several years might be less sensitive to treatments like tamoxifen.

The next steps would be to begin a clinical trial of honokiol in breast cancer patients who are obese, “and then move toward tests of all patients who have this high-leptin state,” Sharma says.

This research was funded by the Breast Cancer Research Foundation and The Fetting Fund.

Learn more about Dipali Sharma’s research, and the work of our other nationally-recognized physician-scientists in developing new ways to diagnose, treat and support breast cancer patients, at the Kimmel Cancer Center’s Breast Cancer Program’s website.