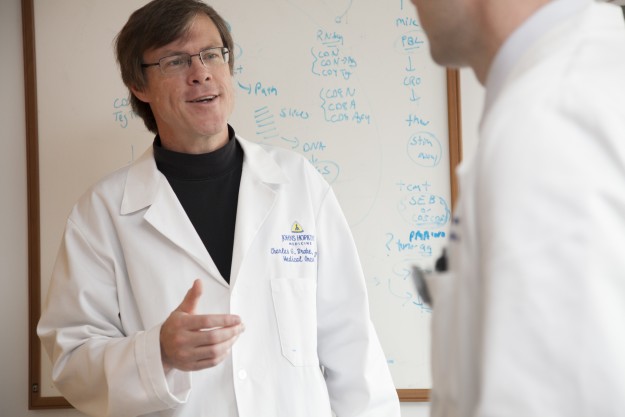 So-called anti-PD-1 drugs, which block the interaction between proteins on cancer and immune cells, are currently approved by the Food and Drug Administration for certain patients with melanoma and non-small cell lung, kidney and bladder cancers. Now, a new study led by scientists at Oregon Health & Science University's Knight Cancer Institute and partially funded by the Bloomberg-Kimmel Institute for Cancer Immunotherapy at Johns Hopkins, has given clinicians hope that some prostate cancer patients may respond to the anti-PD-1 drugs.

In a preliminary report on a clinical trial, 10 patients with advanced prostate cancer that had become resistant to a common hormone therapy called enzalutamide were treated with the PD-1 blocking drug pembrolizumab.  Of these patients, three experienced substantial reductions in their levels of prostate specific antigen (PSA), a marker of treatment response, from 46, 71 and 2503 ng/ml to less than 0.1 ng/ml. Two of the three patients also experienced tumor shrinkage of at least 50 percent of their total tumor volume – i.e. “partial responses.”

The three patients remain progression-free at 30, 55 and 16 weeks of follow up. The rest of the patients had stable disease or did not benefit from the treatment. One patient died of his prostate cancer. Adverse events included hypothyroidism in two patients and muscle inflammation in one subject.

Although it remains to be seen whether anti-PD-therapy has an effect on survival in prostate cancer, immunology expert Charles Drake, M.D., Ph.D., an associate director of the Bloomberg-Kimmel Institute, says that this type of treatment response is not the norm for prostate cancer patients whose disease has progressed after hormone therapy.

“Prior to these data, there was consensus that PD-1 blockade was ineffective for these patients, but this may change the way we think about immunotherapy and prostate cancer,” says Drake. Going forward, additional prostate cancer patients will be enrolled in the ongoing study, and several related studies are being planned.