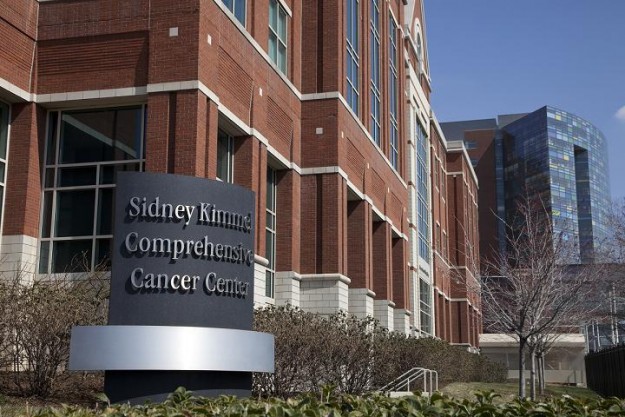 The Kimmel Cancer Center was recognized with many honors and awards in 2017. Here’s the full list:

Sidney Kimmel, leading cancer philanthropist for whom the Kimmel Cancer Center is named was honored with the American Association for Cancer Research Distinguished Public Service Award. He was recognized for his lifelong commitment to supporting advances in cancer research,  fostering the careers of young researchers and advocating for cancer research on behalf  of cancer patients.

Kimmel was also elected a Fellow in the American Academy of Arts and Sciences, a  distinction widely viewed as a mark of excellence in research and education. The Academy is one  of the nation’s oldest societies and independent policy research centers, convening leaders from  the academia, business, and government sectors to address critical challenges facing global society.

Nilofer Azad, M.D., will lead a group of Kimmel Cancer Center scientists who are among a “Dream Team” that will share in $12 million in research funding from Stand Up to Cancer. The research funds will be used to explore immunotherapy and other treatments for colorectal cancer.  Other researchers working in the group, include Dung Le, M.D., and Daniel Laheru, M.D. They will collaborate with scientist from Center’s Bloomberg~Kimmel Institute for Cancer Immunotherapy.

Julie Brahmer, M.D., Director of the Kimmel Cancer Center’s Thoracic Center of Excellence and Co-Director of Upper Aerodigestive Program in the Bloomberg~Kimmel Institute for Cancer Immunotherapy, was elected to the International Association for the Study of Lung Cancer Board of Directors. She was also featured on the cover of last October’s Chesapeake Physician magazine, for her work in advancing lung cancer therapies.

Ross Donehower, M.D., won ASCO’s excellence in Teaching Award recognizing a member who has had a demonstrable impact on his or her trainees and shaped their practice of cancer medicine. Dr. Donehower has directed the Cancer Center’s the hematology and medical oncology fellowship program for 25 years.

Elizabeth M. Jaffee was chosen President-Elect of the American Association for Cancer Research  for 2017-2018. The association, which is the world’s oldest and largest professional organization
for cancer researchers, have more than 37,000 members in 108 countries. She will begin her  one-year term in 2018.

Radiation oncologist Matthew Ladra, M.D., was named one of Washingtonian’s 40 Under 40. Ladra, who runs the pediatric radiation-oncology program at Sibley Memorial Hospital, was selected for his role in providing greater convenience to children and families fighting cancer.

Ben Park, M.D., Ph.D., was appointed associate dean for postdoctoral affairs for the School of Medicine.

Michelle Rudek is the 2017 recipient of the National Cancer Institute’s Michaele Christian Oncology Development Lectureship and Award. The award honors her contribution to the development of novel agents for cancer therapy. She is the first non-clinician recipient.

Gregg Semenza, M.D., Ph.D., the C. Michael Armstrong Professor of Medicine and director of the Vascular Biology Program in the Institute for Cell Engineering, won the Albert Lasker Basic Medical Research Award. The award, among the most prestigious in biomedicine, recognized Semenza for “discovery of essential pathways by which human and animal cells sense and adapt to the presence of oxygen.” His findings have pointed toward potential new therapeutic approaches for illnesses ranging from diabetes to cancer.

Vered Stearns, M.D., Co-Director of the Breast and Ovarian Cancer Program, was named on Forbes list of the country’s top breast cancer oncologists.

The Dr. Susan Love Research Foundation presented Saraswati Sukumar, Ph.D., with its International Symposium on the Breast Collaborator Award for enthusiastic support and decades of partnership with the Foundation.

Suzanne Topalian, M.D., was selected to receive the 16th Rosalind E. Franklin Award for Women in Science. Topalian and Martin Pomper, M.D., Ph.D., were elected to the National Academy of Medicine, one of the highest honors in health and medicine.

The Royal Netherlands Academy of Arts and Sciences Bert Vogelstein, M.D., as the first recipient of its Bob Pinedo Cancer Care Award, a prestigious biennial award for internationally acclaimed researchers in cancer care.

Antonio Wolff, M.D., was included among Thomson Reuters’ 2017 list of the most highly cited researchers in the sciences and social sciences in the world. Wolff was also named one of the American Society of Clinical Oncology’s Advocacy Champions for educating lawmakers on important cancer policies that help ensure high-quality cancer care in the U.S. remains available to all. He was also named chair of the ECOG-ACRIN Cancer Research Group’s (ECOG-ACRIN) Breast Cancer Committee.

Undergraduate student Sabrina Wang won first place in a competition among 125 students for her research on a lethal type of pediatric brain tumor called atypical teratoid/rhabdoid tumors (AT/RT), the most common brain tumor type in infants. Wang, who works in the laboratory of pediatric oncologist Eric Raabe, M.D., Ph.D., found that a subset of AT/RT tumors expresses a cancer-associated gene called MYC. Wang used drugs to block the metabolism processes of AT/RT cells.