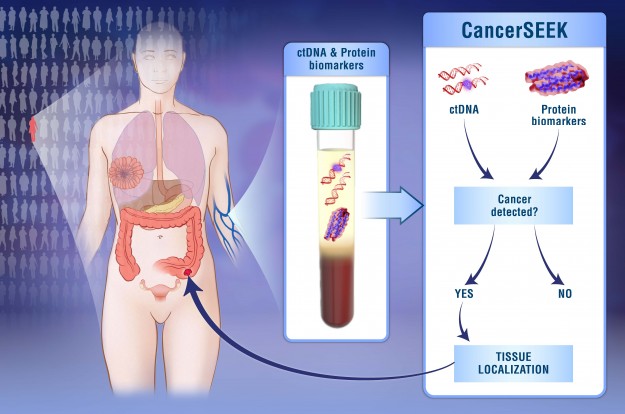 May make the most feared disease a little less scary

Part of the reason—maybe even the main reason—cancer is so scary, is that it seems to come out of nowhere and changes lives in the blink of an eye. We’re feeling fine, but under the surface, hidden within the DNA of our cells, tiny changes are occurring and going unnoticed until one day, years later they’ve turned into a tumor. Now, we’re in a doctor’s office hearing we have cancer. For some, the news comes so late that the cancer has already spread to other parts of the body and treatment options are not looking so good.

For those who suffer from the disease and those who love them, we desperately want something better. It’s still early in development, but our researchers just may have that something.

The same team that created the first genetic blueprints of cancer now have developed a simple blood test called CancerSEEK that screens for eight cancers types, including five that currently have no screening test. Those changes in our DNA leave clues that circulate through our bloodstream, and their test finds them.

It doesn’t pick up every cancer, but it picks up about 70 percent of them, and that’s a lot of people. As Bert Vogelstein, a study researcher and international expert in cancer genetics and early cancer detection, points out: “Many of the most promising cancer treatments we have today only benefit a small minority of cancer patients, and we consider them major breakthroughs. If we are going to make progress in early cancer detection, we have to begin looking at it in a more realistic way, recognizing that no test will detect all cancers.”

I think of it this way—if I’m one of 30 percent or so whose cancer the test may not detect, I’m exactly where I was the day before I had the blood test—no better, no worse. But, if I’m one whose cancer is detected by the test, it could be life saving.