Richard Humphrey, a multiple myeloma pioneer who was among our founding Cancer Center faculty members and former director of its diagnostic immunology laboratory, died on March 27, 2018.

Dr. Humphrey reflected on the early years of the “Oncology Center” on its 25th anniversary: “Mighty oaks from tiny acorns grow. Who would have predicted that such an awesome enterprise would develop from such a modest beginning? In the 1950’s the oncology program consisted of a wooden table, a drawer of pipettes, and a ph meter. For 38 years, I was privileged to play a small part in the Center’s growth.”

Dr. Humphrey is recognized for employing multiple myeloma laboratory and animal models that improved the understanding of the cancer and led to novel treatments, but he is most remembered for his commitment to using discoveries to benefit patients. He was a respected teacher, always making time for students, house staff, and trainees. 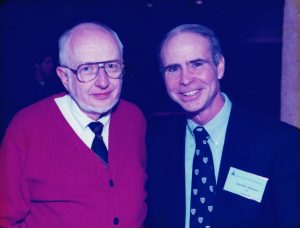 “Dick Humphrey was selflessly committed to patients and their families.  He influenced me both professionally and personally to pursue academic medicine and myeloma in particular, always putting the patient first,” recalls Kenneth Anderson, M.D., Lymphoma and Myeloma Co-Leader at the Dana-Farber Cancer Institute and former student of Humphrey’s. “The two most important lessons he taught me and many others were to make science count for patients and to treat patients as family. These lessons have been my core values ever since.  I was privileged and honored to have known him as a mentor, role model and dear friend.  His legacy of training researchers and caregivers will continue to improve the lives of countless patients worldwide.”

Kimmel Cancer Center multiple myeloma expert Ivan Borello, M.D., remained in contact with Humphrey after he retired, discussing research and treatment advances with him. Borrello attributes many of today’s advances against the disease to Dr. Humphrey’s early pioneering work. “After retiring, Dr. Humphrey looked on with awe at the amazing advances that had been made in myeloma, not realizing that many of them were in large part the result of the seeds that he planted among so many individuals in the formative years of their careers,” says Borrello. “He lived a life of dedication to medicine.  He loved his patients, his work and his colleagues.  I am greatly indebted to him. He will be greatly missed.”

« “SEEK” and You May Find Cancer » Jaffee to Lead AACR; Conference Focuses on Innovative Cancer Science