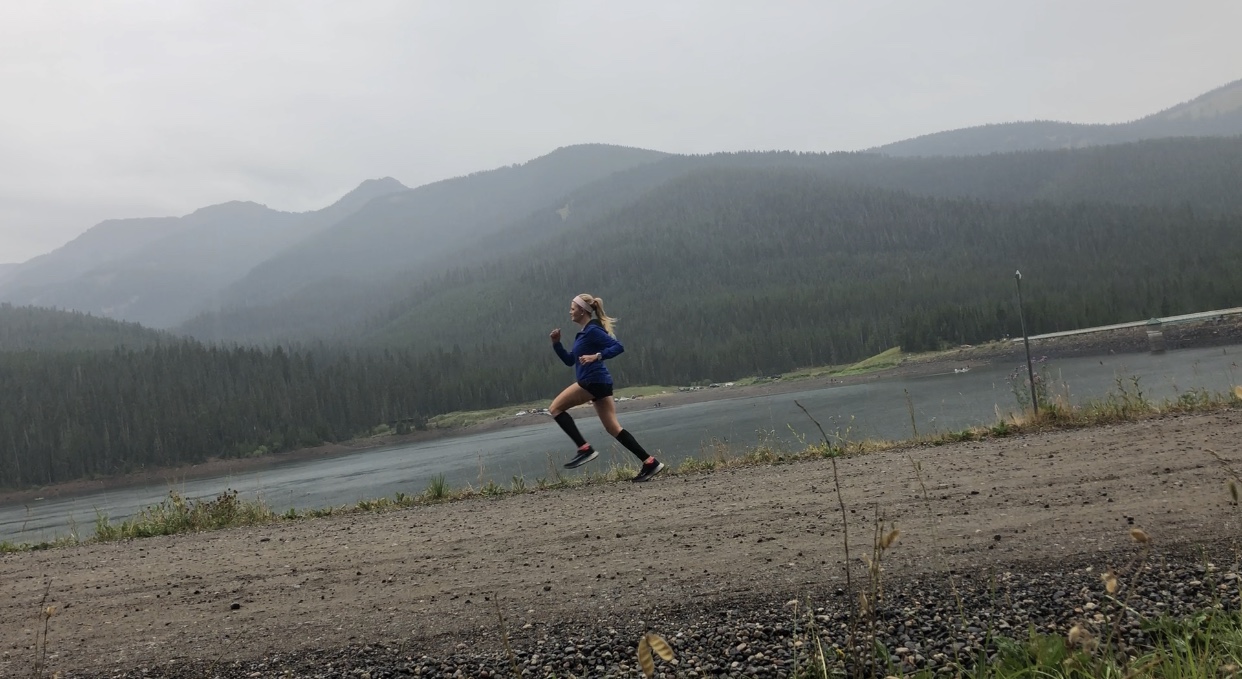 Some days, when 37-year-old Kristina Baum laces up her running shoes and starts out on her daily training run, she says she feels like someone is taking a sledgehammer to her lungs. Other days, she feels fantastic. That’s really not too different from how other runners training for a marathon describe the ups and downs of the arduous process. And there’s no doubt that Kristina shares the same sheer grit and tenacity that give anyone the determination to be able to run 26.2 miles—the length of a marathon—in one outing. But there are probably few people, if any, who have overcome the obstacles that Kristina has stared down in order to reach the starting line of the 2019 New York City Marathon. 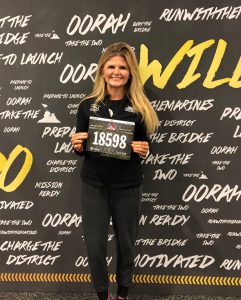 Kristina recalls 2012, when she was living a life similar to any other young professional. “I was working for a PR firm, rising through the public relations ranks, hanging out with friends on weekends,” she says almost wistfully. In those busy but carefree days, she barely made time to get the colorless spot on her upper arm checked out by a doctor. It didn’t seem like a big deal.

But six days after getting a biopsy of the clear raised bump on her arm, Kristina received a life-changing phone call. “It rocked my world,” she says, of the doctor informing her that she had melanoma. She was just 30 years old. Despite having grown up in Florida where she tanned and enjoyed the beach, and where sunscreen was an afterthought, Kristina never thought about developing melanoma. When you’re young, the warnings don’t seem to apply to you. Now, Kristina suddenly had to learn how to take charge of her health in a way that few young adults do.

Initially, Kristina went through the motions of cancer treatment feeling as if she had very little say in the process. She received treatment at a community hospital that was convenient to where she worked in Washington, D.C. But after undergoing two surgeries and drug treatment that left her feeling horrible, she was forced to take a chunk of time off from work for the first time in her life. Then, when a follow-up scan showed the possibility of cancerous cells in her lungs (which turned out to be a false-positive), Kristina decided to take matters into her own hands.

She met with a social worker and acknowledged her dissatisfaction regarding her health status and treatment. The social worker urged her to seek a second opinion. “I didn’t even realize I had a choice in patient care,” Kristina admits. But soon afterward, she made an appointment at the Sidney Kimmel Comprehensive Cancer Center at Johns Hopkins. That was six years ago. Now, she describes her medical team at Hopkins as being ‘like family.”

“I’ve been super fortunate to have great care. My medical team at Johns Hopkins is on the cutting edge. There are a lot of clinical trials that are available here,” she says of the Bloomberg~Kimmel Institute for Cancer Immunotherapy (BKI) at Johns Hopkins, a research powerhouse.

The fighting spirit that pushed Kristina to train for the 2019 NYC Marathon also kicked into high gear when she agreed to enroll in a BKI clinic trial in 2016 after learning her melanoma had spread to her left kidney.

The trial involved an experimental combination of two immunotherapy drugs: one FDA-approved; the other one, not. Immunotherapy drugs work by boosting the body’s natural defenses to attack cancerous cells. But sometimes, they inadvertently attack the body’s healthy parts, too. After two rounds of treatment in the clinical trial, Kristina experienced that first-hand. “It [the drugs] recognized my brain as cancer,” she says. The serious side effect took a toll, temporarily. But the treatment also did the job it was supposed to do, eradicating the cancer in her kidney.

That gave Kristina the green light to ramp up her training. She started running increasingly long distances, participating in triathlons and marathons. She appreciates that her medical oncologist, Dr. Evan Lipson, has rarely told her ‘no.’ “He’s not going to tell me not to do a race. He’s a triathlete. He gets it,” she says. She does acknowledge that he cautioned her against doing a full Ironman—a particularly grueling long-distance triathlon race—when she was first diagnosed. 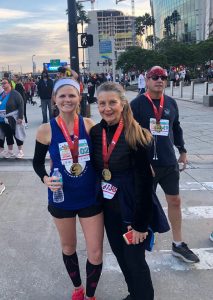 There are also times, Kristina has learned when you have to listen to your body for signals that it’s time to slow down. That happened to Kristina in 2018. She had just finished a marathon. She was experiencing headaches and extreme fatigue. She thought she was over-training. She soon learned that she had a tumor in the left occipital lobe in her brain. So it was back to treatment. This time, she took the FDA-approved immunotherapy drug that had part of her clinical trial and received Cyberknife radiation. Once again, she beat back her cancer. Now, almost a year later, she will get a shot at a different challenge.

As Kristina approaches the starting line at the New York City Marathon on November 3, 2019, she will be one in a crowded field of approximately 50,000 other runners, each carrying their own personal stories and struggles through the 26.2 miles. It will be grueling. Kristina says that’s one of the things she loves about a marathon.

“You have to dig deep into this file of why you’re doing this in the first place. That’s where you find the reason to keep putting one foot in front of the other,” she says.