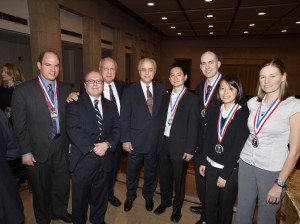 Last Friday, the historic Hurd Hall at Johns Hopkins was filled to capacity with students, faculty and staff waiting to hear five scientists – all in the early part of their careers – describe their novel ideas on how to cure metastatic cancer.  It was part of a competition on creative thinking named for John Rangos Sr., chairman of the Rangos Family Foundation, who funded the awards.  Rangos worked with Johns Hopkins faculty members Donald S. Coffey and Horst Schirmer in the Department of Urology to develop the competition.

Each scientist had 10 minutes to present their idea and answer questions from a panel of Johns Hopkins faculty judges.

Master of creative thinking, Coffey, whose theory on killing cancer by weakening its DNA scaffolding continues to spur innovative research, opened the event, describing it as the “Olympics” of research competitions at Johns Hopkins.

The finalists were awarded the John G. Rangos Medal of Honor in Creative Thinking and the top three winners received cash prizes.

First up to the podium was medical oncology fellow and fifth place winner Kevin Cheung who proposed turning back the clock on cancer cells, reprogramming them into germ cells. He suggested that the reason testicular and other germ cell tumors have high cure rates is because of their undifferentiated state. Just as scientists have created immature pluripotent stem cells from adult cells, Cheung says that the same could be done with cancer cells.  By age reversing resistant cancer cells, he proposes to make them sensitive to conventional chemotherapy.

Genetics postgraduate student and second-place winner Cheng Ran "Lisa" Huang described cancer as a “fight between two parasites – cancer versus transposons.” She noted that nearly half of the human genome is made up of “jumping” DNA – short sequences of DNA that get inserted into the genome at various points.  Too many transposons can lead to genomic instability and kill the cell.  Huang says that germ cell tumors have the highest level of transposon activity, making them more prone to cell death, and thus, more easily killed by chemotherapy drugs.  There is potential, she says, of using drugs to target proteins that normally suppress transposon activity in most cell types.

Brian Ladle, a pediatric oncology fellow and fourth-place winner, presented his idea that cancer cures rates depend on the level of uniformity between cancer cells.  Low-risk pediatric leukemias are mostly curable, he says, and most of the cells have uniform qualities and certain genetic abnormalities in common.  Cancers that are more difficult to cure are less uniform. Ladle suggests that targeting different populations of cells within cancers could result in fewer relapses and more cures.

Just before Sharabi was announced the top winner, John Rangos Sr. called Hopkins a “beacon of light in the measurement of medicine.”  It is here, he said, that we’ll find the next generation of scientific leaders.

Congratulations to the Rangos award finalists and all those who value creativity and innovation.