Preventing the Return of Breast Cancer: Recipe for a New Era

***The following post was written by Dr. John Fetting at the Johns Hopkins Kimmel Cancer Center. 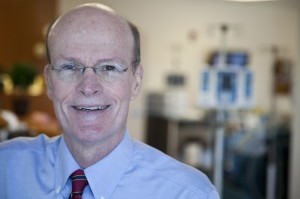 After 30 years as a breast cancer medical oncologist, I have come to believe that we are too focused on trying to cure breast cancer and not focused enough on preventing it.  Until recently, treating breast cancer after it was diagnosed, and may have already spread, has been the best we could do. Despite substantial progress, cure is still uncertain and the road hard.  Along the way there is too much unnecessary trauma for too many.  Now that we have learned so much about the changes in breast cells which lead to cancer, we can prevent the trauma of breast cancer and its treatment.

Consider how we try to cure breast cancer. We screen for breast cancer with mammography. We hope to diagnose breast cancer when it is non-invasive or, if it is invasive, when it is small so there has been little chance of spread. We remove the cancer surgically and treat the breast with radiation to eradicate the cancer in the breast. Then, if the cancer is invasive, we usually administer drug therapy, i.e. adjuvant therapy, in an attempt to kill any cancer cells which have left the breast.  Adjuvant therapy includes easy-to-take oral agents like tamoxifen, more toxic chemotherapy, and often both. There then follows what we hope will be a life without recurrence.  Have we made progress with this approach? Yes, we have.  Breast cancer mortality is coming down. Can we improve this treatment approach? We can and we will.  But we treat more patients with adjuvant therapy than need it and this treatment approach produces too much collateral damage for too many patients and their families.

How is this? The goal of breast cancer treatment is to prevent the establishment of cancer in other parts of the body, i.e. metastases. It is metastases which cause death. Metastases typically develop some years after the diagnosis and initial treatment of breast cancer. It is very unusual to find overt metastases at the time of initial diagnosis. But in some patients at the time of diagnosis there has been spread of small numbers of cancer cells to other body parts. These cells, called micrometastases, divide again and again over time and give rise to overt metastases in the years after diagnosis. The goal of adjuvant therapy is to kill these cells.

A severe limitation of our current treatment approach is that we are not able to detect these micrometastases. We do not know which patients have cells elsewhere in their body and which do not. The best we can do is estimate the probability of metastases in the future based on features of the cancer, e.g. lymph node involvement, tumor size, then assume that this same fraction of patients harbor cells. For example, patients who do not have cancer in their underarm, i.e. axillary, lymph nodes have a 20- 30% risk of metastases over 10 years without any adjuvant therapy. This suggests that the same 20-30% of patients have cancer cells in other body parts at the time of diagnosis. It also means that 70-80% of patients with negative nodes will not develop metastases and do not have cells elsewhere at diagnosis. But which patients have cells and which do not? We are not able to distinguish. What do we do? Since a 20-30% risk of metastases is a serious threat, we treat the whole group. We treat the 20-30% who harbor cancer cells and the 70-80% who don’t. And treatment works. Treatment lowers the risk of metastasis in node-negative patients from 20-30% to 10-15% or lower. The problem with this approach is that 70-80% of patients are receiving treatment they don’t need. If treatment had no side effects, this overtreatment would not be so traumatic. But treatment has side effects. Most are short-lived but, rarely, side effects result in long term disability and death. What is most troubling about this approach is that survivors live with uncertainty about whether they will develop metastases. There is a shadow over their lives.

How can we improve?  The best way to prevent the trauma is to detect breast cancer before it can spread…..or before it is even breast cancer. A second way is to sharpen our ability to distinguish cancers which have given rise to micrometstases from those which have not.   At least then we will know who needs treatment and, very importantly, who does not.  We can reassure the many patients who do not have micrometastases, spare them treatment and its side effects, and give them back a future free of threat from breast cancer.

The path forward is found in our ever-improving understanding of the genetic changes which cause breast cancer and enable it to spread. We are on the cusp of identifying genetic signatures of cells which are on the way to cancer. Once we know these signatures we can intervene with women who are at truly high risk. In much the same way we are poised to identify the genetic signature of cancer cells which have developed the ability to spread. We will be able to distinguish patients whose cancers have this micrometastatic signature from those which do not. We will then be able to focus our adjuvant treatments on those who truly need and spare those who do not.

DNA is a double-stranded molecule built from just four nucleic acid building blocks:  guanine, cytosine, adenine, and thymine.  We each have an enormous amount of DNA which is packaged into our chromosomes. We have 46 chromosomes and inherit 23 from each of our parents. Our DNA is organized into segments called genes which drive all the important processes in our cells. Mutations in genes are changes in the nucleotides which can change the way our cells work. In some cases mutations can lead to cancer and to cancer which can spread.  Mutations in the nucleotides are not the only way a normal cell can become an invasive cancer. Another way of changing gene function is by chemically modifying the nucleotides so that the gene is no longer able to express itself. These chemical modifications are called epigenetic changes.

How do we do this?  One of the most important ways is to recruit large numbers of women whom we will follow over long periods of time. These groups are called cohorts and the studies are called cohort studies. For our efforts to distinguish cancers which have spread microscopically from those which have not, we will need large numbers of cancer patients who have been or will be followed for long periods of time. During that time some will have developed metastases; many will have not. We must then try to discover the genetic signature in their breast cancer tissue which identifies those who developed metastases. Once we have defined the genetic signature for metastasis we can focus adjuvant therapy on those with this signature and reassure those patients who do not.

In a very similar way we can identify the genetic signature which predicts the development of breast cancer in the first place. We will need to follow large numbers of women who do not have breast cancer   for long periods of time. Some women in the cohort will develop breast cancer; many will not. We need to sample the breast tissue of all these women periodically during follow-up and profile the genetic and epigenetic changes in the breast tissue. In this way we can identify the changes which precede and are necessary for the development of breast cancer.  Once we have identified these causative genetic and epigenetic changes, we can search for them in the breast tissue of other women in order to identify women at risk. Instead of women having screening mammograms to detect a suspicious mass or telltale calcifications, we may be able to sample breast tissue to identify women who have a high risk profile.

This effort to prevent the threat and trauma produced by breast cancer will require every bit as much of a commitment as the commitment to cure breast cancer.  We will need teams of researchers, an army of women participants, breast and breast cancer tissue, and financial support for the work.  We are ready now as never before to make real strides in preventing this life threatening disease and the trauma associated with our current unfocused efforts to cure it.

4 thoughts on “Preventing the Return of Breast Cancer: Recipe for a New Era”