Cancer-Free Mondays: Maryland and Johns Hopkins – A Partnership that Works for Maryland Citizens

This blog is part 1 of 4 of our “Cancer-Free Mondays” series about how the Maryland Cigarette Restitution Fund is helping Maryland Citizens. 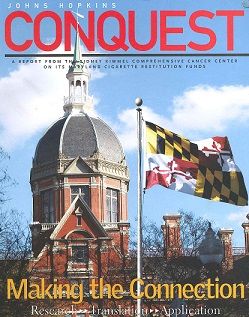 In 1990, Maryland had the highest cancer death rates in the nation.  Today, cancer deaths rates in our state are below the national average, and Maryland ranks 30th among all states.  How did Maryland go from first to 30th?  The lion’s share of this progress is attributable to the Maryland Cancer Control Plan and the Maryland Cigarette Restitution Fund (CRF).

It was about the same time as these alarming cancer rates were made public that Maryland joined 46 other states in a class action lawsuit against America’s cigarette manufacturers.  States were seeking reimbursement for the huge costs they faced because of smoking related diseases, like cancer. The states won and split the $53 billion in penalties they received.  The governors and legislators from other states that benefitted from the tobacco company settlement chose to use the money to patch holes in their state budgets or engaged in lengthy legal battles over it. Maryland stood alone and earned national distinction when its elected officials decided to use the money to fight cancer.  Wow, has that decision paid off.

Cancer death rates in our state are plummeting, and this decline coincides directly with the establishment of the Maryland Cancer Control Plan and the Maryland Cigarette Restitution Fund.  All of the major cancer killers:  lung, prostate, breast, colorectal, and cervical cancers, are on a downward trend in Maryland.  While cancer death rates throughout the nation are trending downward, Maryland’s death rates are falling more rapidly than the national average. In fact, for colorectal cancer specifically, Maryland has the highest rate of decrease in the U.S.

Our experts at Johns Hopkins are proud to call Maryland home, and they are honored to have had the opportunity to work with Maryland officials and citizens to help achieve this remarkable success.  We look forward to further progress.  We understand there is more work to be done, but the formula for success has been put in place.  There may be ups and downs in funding, but state officials have demonstrated their commitment to staying the course, and that is why Maryland is making unprecedented strides against cancer.

1 thought on “Cancer-Free Mondays: Maryland and Johns Hopkins – A Partnership that Works for Maryland Citizens”