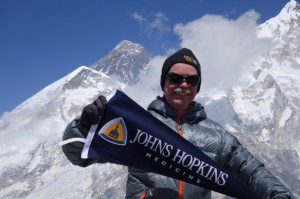 Photo at Left: Dr. Ted DeWeese at the summit of Mt. Kala Pattar. It is 18,600 feet above Everest Base Camp and is considered the best place in the world to view Everest.

The name is even more recognizable than our own Johns Hopkins and mispronounced with far less frequency. The country of Nepal’s Mount Everest—for nearly a century, mountaineers, sportsman and adventurers have sought to climb planet Earth’s highest mountain. It’s peak among the Himalayan Mountains sits 29,000 feet above sea level. (For context, it would take 20 Empire State Buildings or nearly 30 Eiffel Towers stacked one atop the other to reach the peak of Everest.)

To climb Everest requires incredible mental and physical stamina. From altitude sickness, subfreezing temperatures, avalanches, dangerous crevasses, and large pieces of falling ice, Everest can subject even the most skilled of its would-be ascenders to a variety of challenges. Its rocky and frozen face is the setting for great accomplishments and incredible tragedies. Dr. Theodore DeWeese, Director of Radiation Oncology and Molecular Radiation Sciences, witnessed a little of both during his recent trek to the Base Camp of Mt. Everest and the scaling of several mountains around it.

Dr. DeWeese trained for more than a year to get ready for his Everest trip. Part of his regimen included daily stair climbs with a weighted backpack from the basement to the roof of Johns Hopkins’ tallest building, the Zayed Tower.

He was well prepared, and although the elements were not always kind, including 50 mph winds and temperatures in the twenties, his trip was everything he had hoped. The grandeur of the mountain is difficult to describe, he says. “Photos, even those done by professional photographers, do not do it justice, and words cannot adequately describe the beauty and size of the mountain,” says Dr. DeWeese. “It is a place that causes a person to become quite conscious of his connection to the world.”

At about 14,000 feet on his trek to the mountain, he and his fellow climbers serendipitously came upon the funeral for one of the local mountain guides from the community called the Sherpa who was killed in a recent avalanche. They were invited into the Tibetan Buddhist monastery where it was being held. The Sherpa was one of 16 killed in the April 2014 disaster that resulted in the largest loss of life ever in a single day on Everest. The event was both a reminder of the unpredictability of the mountain and of its beauty. “It was an honor to observe this 800-year-old culture. It was an amazing experience, and one that could not have been witnessed anywhere else in the world,” says Dr. DeWeese.

His trip included a two-week Sherpa-guided climb up the mountain to 18,600 feet, and a one-week trip back down. (Hikers can climb to 21,000 feet without oxygen.) On the last day of the trip down the mountain, Dr. DeWeese passed a young man and woman sitting to the side of the trail. Sensing something was wrong, he returned to check on them. The man was ill with food-poisoning-like symptoms. It was the first day of the couple’s trip up the mountain, and despite his ill health, the man was determined to continue their planned hike for the day. The young American couple, who seemed to be in their mid to late twenties, appeared very fit, but they were attempting their climb without a guide. Each was carrying backpacks weighing about 70 pounds, and they still had had four hours of steep climbing ahead of them. Dr. DeWeese had medical supplies in his gear, and he gave the man an antibiotic and hydration packets. Dr. DeWeese’s guide suggested a small lodge nearby where the couple could go to rest and allow the antibiotic to go to work.

Dr. DeWeese returned to his group, but the young couple remained on his mind, so he and two of his hiking mates walked back. Just 30 minutes had passed since he had left the couple, but the man was now laying in the dirt. He was pale, shaking, and sweating profusely. Dr. DeWeese recognized that the man had a systemic and potentially life-threatening infection, which he later learned was caused by an ill-advised chicken burrito he ate in Katmandu, Nepal the day before.

Dr. DeWeese and another climber carried the sick climber to the small lodge the Sherpa had mentioned earlier. Had they not been on the side of a mountain, Dr. DeWeese says the man was sick enough that he would have been hospitalized. Once there, Dr. DeWeese learned he had not yet taken the antibiotic, so he got him into one of beds in the tiny six-foot by six-foot space and went to work administering antibiotics and fluids. Up until this point, the young man was trying to convince himself that his illness was not that serious, but now he was scared and compliant.

During the of course their conversations, Dr. DeWeese was surprised to learn that the woman had just graduated from medical school and was about to begin training in radiation oncology. The couple did not have cell phones or radios, and without medical attention, the young man could have died on the mountain. Yet, there in the one of the remotest areas of the world, they came upon each other—this young, up and coming radiation oncologist and one of the world’s leading and most seasoned radiation oncologists, and fortunately for the young couple, Dr. DeWeese was well prepared. He left the woman with all of his medical supplies, instructions for caring for her friend, and a few words of sage advice.

“Remember, this is a vacation,” Dr. DeWeese told them. “I know you have a goal, but you can always come back another time.”

A few weeks after he returned from his trip, Dr. DeWeese received an email from the young woman thanking him for his help and letting him know that her friend had recovered and they were able to safely complete their climb to Everest Base Camp.