***With the end of summer, we bring you a three-part series about Camp Sunrise, a place of summer fun for pediatric oncology patients at the Johns Hopkins Kimmel Cancer Center. This is the second part of the series; read part one.

Childhood is supposed to be marked by sweet and simple memories, like losing a first tooth, learning how to ride a bicycle and going off to summer camp for the first time. Amanda Endres’ childhood was not so typical. When she was just 8 years old, she faced the frightening diagnosis of an aggressive blood cancer, acute lymphoblastic leukemia (ALL). Then, at 11, her cancer came back, and again at 16. Despite the fear, uncertainty and physical challenges that overshadowed so much of Amanda’s youth, there was a clear and certain bright spot that gave her back some of what cancer had stolen—if only for one week each year. 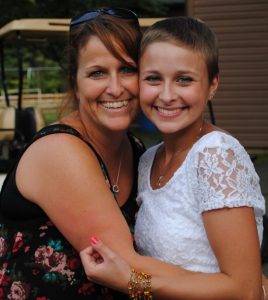 Amanda and her mother

That bright spot is Camp Sunrise.

Just months after being diagnosed with ALL, Amanda boarded a bus for her first trip to Camp Sunrise. It’s a memory etched firmly in the minds of both Amanda and her mother, Jenni Endres.

FIRST-TIME JITTERS
“I was really excited to go, but when it came time to get on the bus, I was clinging to my mom. I didn’t want to go at all,” Amanda recalls.

Although first-time camp jitters and homesickness are completely normal for young children, cancer is not. It punctuates the worries of parent and child. As Jenni watched Amanda ride away on that bus, she was consumed by fear and doubt. Ever since Amanda had been diagnosed and started an intensive treatment with potent anticancer drugs, Jenni had rarely left her side. Now they’d be apart and have no contact for a week.

On the bus, Amanda’s tears subsided as an older, experienced camper sat down next to her and assured her that their time ahead would be filled with fun and friendships. By the following morning, Amanda says her worries—mostly about making new friends—had completely subsided. The rest of the week was devoted to traditional camp fun and friendships.

“She happened to be bald, but everybody else was too,” says Jenni. “There are no cliques at Camp Sunrise. No one identifies as popular or unpopular.”

As Amanda was busy enjoying skating, dances and other fun activities at Camp Sunrise with her new friends, her mom took the opportunity to play catch-up at home. “It gave me a chance to reconnect with my other three girls,” Jenni says.

QUELLING PARENTS’ ANXIETIES
Like Amanda, her mother soon relaxed, reassured by the knowledge that Camp Sunrise always had a full-time physician and specially trained nurses on-site to provide
care, give treatments and medications, and respond to any medical needs that arose during the week.

If that wasn’t enough, Jenni, whose catering company provides food for Camp Sunrise, also had another source of comfort. Although Jenni could not deliver the meals in person—Camp Sunrise is a parentfree zone—she received glowing reports from her employees who took the meals to camp.

Now that Amanda is no longer a camper, she has visited Camp Sunrise and witnessed firsthand what a special place it is.

“It’s a learning experience for me as a mom to see how the kids help each other and are comfortable with each other. It’s a good place. It’s a happy place,” says Jenni.

It’s not surprising that most campers choose to return to Camp Sunrise every summer. Amanda has only missed one summer since that first trip in 2008. It was the year of her first relapse, and the more intense therapy used against the resistant cancer cells that had caused her cancer to come back led to side effects and hospital stays that kept Amanda from camp that year. “I was really bummed, but I went back next year,” Amanda says.

SPECIAL BONDS
Camp Sunrise offers more than the traditional summer camp experience. Amanda says it’s the friendships she’d forged that stand out the most. As time went on and she suffered not one but two relapses with ALL, the distance between her and most of her former friends widened.

“My Camp Sunrise friends were the only ones who would text me every day because they knew exactly what I was going through,” she says.

A NEW ROLE
At 19, she has come a long way from the little girl who took a bumpy bus ride to Camp Sunrise for the first time. She is busy taking coursework as she prepares for her new goal—to become a pediatric oncology nurse.

This summer, Amanda will also take on a new role at Camp Sunrise. It will be her first year as a counselor. She has spent the past two years in training.

“Now it’s my turn to comfort a scared or shy child on their first bus ride to Camp Sunrise,” says Amanda. “It’s a lot of fun to give back.”