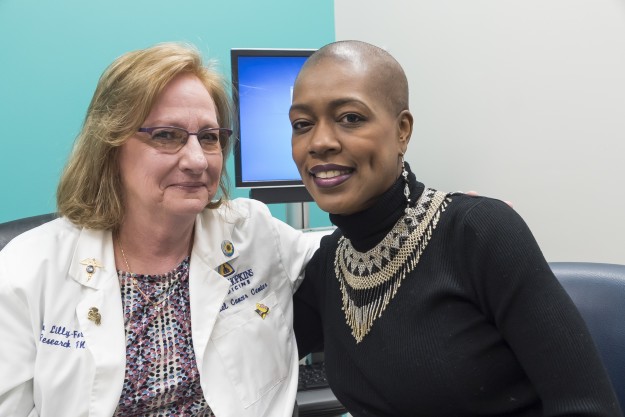 Trina Taylor (Isaac) has felt God’s guidance throughout her journey with colorectal cancer. She had been out of work for over a year before she was hired at The Johns Hopkins Hospital in 2008, an opportunity that was an answer to her prayers and more.

Isaac remembers feeling sluggish. Already thin, she was losing more weight and didn’t know why. She had some mild GI symptoms, and the combination caused her to go to Johns Hopkins Occupational Health Services, which directs employees to experts who can advise them on health-related issues.

Occupational health got the medical tests rolling, including a colonoscopy. Isaac learned she had advanced colon cancer.

“I prayed. I cried, and then I made up my mind that I was going to beat it,” says Isaac. “I have cancer, but cancer doesn’t have me. I refused to let it control me.”

She had surgery to remove a large portion of her colon and began chemotherapy. Her colleagues at Johns Hopkins rallied around her. “I told my staff, if I come to work wearing stilettos, that’s a sign that it is a good day. If I’m wearing flats, you will know I’m having a tough time,” she says.  They coined the phrase “strength in stilettos” to honor Isaac’s courage and perseverance. “They made me want to come to work,” she says.

Isaac’s cancer continued to grow, and it persisted even with more chemotherapy and the addition of radiation therapy. In 2013, she had a permanent colostomy to surgically remove more of her cancerous colon.

Isaac remains strong and continues to look to clinical trials—studies of experimental new treatments—to gain an edge on her cancer.

“This journey isn’t easy,” she says. Isaac has a young son and can’t help but worry about not being here for him.  She focuses on enjoying each moment with him and bringing hope and information to others battling cancer. She lives her life by her self-proclaimed motto #MMOP—make memories on purpose.

She makes sure her voice is heard. She is a member of a Johns Hopkins patient advisory council, the Hope Project, encouraging other Kimmel Cancer Center patients. She is also an Osto Beauty—one of four African-American women who stepped out of their comfort zone to put a public face to colorectal cancer and offer support to women who have or need colostomies.

“I wanted to go out into the community to talk about my experience,” she says. “People don’t talk about it.”

Isaac has chronicled her journey on Facebook, and the stunning survivor caught the attention of a fashion designer. Now, Isaac can add runway model to her list of accomplishments. More importantly, however, she hopes to be a role model—for her son and for everyone battling cancer.

5 thoughts on “Stronger Than Colon Cancer”