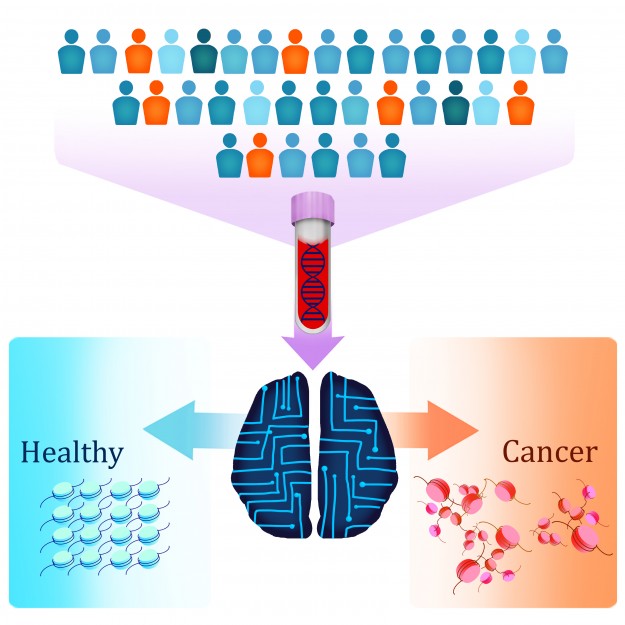 A new cancer test developed by Johns Hopkins Kimmel Cancer Center scientists screens for seven types of cancer in a completely unique way. DELFI is a new and different kind of cancer screening test. Rather than finding cancer gene mutations or chemical alterations to the DNA, known as epigenetic changes, it detects unique patterns in fragments of DNA shed from breast, colorectal, lung, ovarian, pancreatic and gastric cancer cells that are circulating in the bloodstream.

Cancer’s main advantage over normal cells is that it grows faster. But, as cancer cells rapidly divide they end up repackaging their DNA haphazardly, much like a hurried traveler who scrambles to pack, grabbing and stuffing items in a suitcase. Contrast that to the neatly packaged DNA of a normal cell, which can be compared to the neatly organized suitcase of a traveler who has had time to plan and prepare.

Mutations and epigenetic alterations may vary from cancer to cancer, but the irregular packaging of DNA appears to be universal to cancer, and this is what the DELFI test detects and also what makes it different from other liquid biopsy cancer screening tests.

Cancer scientists have long known that the nucleus of cancer cells—where the DNA is packaged—looks different than the DNA of normal cells. It is precisely what pathologists look for to diagnose a cancer when they examine tumor tissue under the microscope. The problem is that by the time the pathologist has the opportunity to examine the sample, a tumor has already formed, and may be at an advanced stage. DELFI finds the abnormal DNA packaging at the molecular level through a noninvasive blood test, even when the tumor is at an early stage. That’s significant, because a cancer detected early is often a cancer that can be cured.

In the initial research testing of DELFI on blood samples obtained from 208 patients with various stages of breast, colorectal, lung, ovarian, pancreatic or gastric cancer and 215 healthy individuals, it accurately detected cancers 98 percent of the time. This is important because several of the cancers DELFI detects currently have no early screening tests.  DELFI was also able to identify where the cancer originated 75 percent of the time.  Senior investigator Victor Velculescu, M.D., Ph.D., says they used a form of artificial intelligence known as machine learning—the same technology that is used in facial recognition technology and driverless cars—to detect the cancer signal and identify the origin of the cancer, and it improves as more and more data are compiled. As a result, he says, these numbers are likely to improve as more patients are studied.

More studies are needed to confirm the findings, and Velculescu says the validation studies will take several years, but when completed, he envisions the test will be low cost, widely applicable and complementary to other existing screening tests, such as colonoscopies or low dose spiral CT scans for high-risk lung cancer.