Strategies for staying the course

***Note: This is the third of a four-part feature story, written by Elizabeth Huebeck. Read part one on Kristin's story and part two on cancer as a chronic disease. 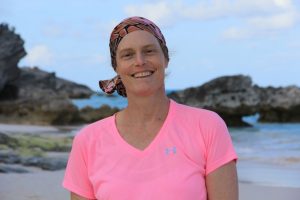 Accepting primary control of your disease

As a patient, Kristin Franceschi has learned that sometimes, after receiving the best standard practices of standard care, the cancer may return or metastasize and additional treatment may still be required. And for these next steps, a clear linear treatment path doesn’t always exist. Sometimes, that may mean choosing between less-than-perfect options—each of which can pose potentially risky side effects.

Kristin recalls some of the tougher treatment decisions she’s had to make during her cancer odyssey. “I have had to consider that I could die on the operating table if I undergo surgery. But if I do the [clinical] trial first and wait on the surgery, the tumor could grow,” she shared.

While a patient’s medical team can and should weigh in on these decisions, ultimately, acknowledges Kristin, it’s the patient who must choose. She refers to this ownership as “playing quarterback” throughout the disease process, and it’s something she urges other patients to do.

“As a patient, you have to look at every trial. I spent a huge amount of time trying to figure out what trials were possible for me,” Kristin recalled.

While playing quarterback or taking control of your cancer can mean being the ultimate decision maker for significant medical decisions—like which cancer trials might be right for you and which treatments you should receive in what order—it can also mean finding ways to manage seemingly smaller, albeit significant, issues.

For instance, as a side effect of chemotherapy treatments, Kristin suffered from a severe skin reaction on her face and neck that caused painful burning and inflammation. After a lot of trial and error, she developed a skin regimen that was part coconut oil, part a bee venom lotion, and part Bert’s Bees. Relieved to find something that cleared up the problem significantly, Kristin happily shares her “finding” with other patients who experience similar skin reactions.

Although Kristin urges patients to take control of their disease, she acknowledges that seeking input from trusted medical professionals is critical to making informed decisions about treatment options.

“I would engage in the conversation about going to Hopkins, even if your diagnosis is routine. I tell other patients: Do yourself a favor and get a second opinion,” Kristin said.

In an academic medical setting such as Johns Hopkins, patients benefit from the clinician-scientist model of pioneering and practicing best standard practices. Institutions such as Johns Hopkins also tend to have much more experience than smaller, community hospitals treating rare and aggressive cancers.

Stay tuned for the final part of the series on how Kristin monitors her health. Subscribe to this blog.

1 thought on “Strategies for staying the course”