***This is the first of a four-part feature story, written by Elizabeth Huebeck. Read part two on cancer as a chronic disease, part three on Kristin's strategies for staying the course and part four on how Kristin monitors her health. 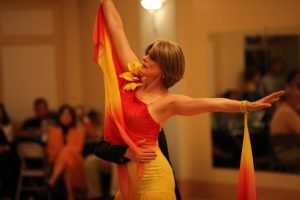 About eight years ago, Kristin Franceschi—a tall, striking woman in her mid-fifties—began a new hobby that would soon find her in the limelight as a nationally-ranked ballroom dancer. It seems nothing can stop her from gliding her way across ballroom floors with purpose, ease, and grace, not even a diagnosis of Stage IV colon cancer and the subsequent debilitating effects of multiple rounds of chemotherapy and surgery.

Kristin’s intense perseverance has allowed her to remain a champion—not only of dance, but of her own   health. Just as she spontaneously discovered her talent at ballroom dancing after wear and tear on her knees from years of running forced her to stop competing in marathons, she also has managed a sudden and life-altering cancer diagnosis with grace and grit.

Her odyssey with cancer began just over five years ago, on her fiftieth birthday, when Kristin dutifully underwent a routine, first-time colonoscopy. A suspicious result led to a CT scan the very same day, followed by a startling finding: She had Stage IV colon cancer. “I went from being normal to having Stage IV colon cancer in 24 hours,” Kristin says.

The only symptom, she insists, was mild diarrhea. And who wouldn’t be plagued with that slightly irritating side effect when eating pounds of asparagus weekly, she jokes lightly. That unremarkable symptom of colon cancer was negligible compared to the physical and mental challenges Kristin has endured as a cancer patient.

Thus far, her treatment has included three six-month courses of chemotherapy and the near-crippling side effects that result from it, three lung surgeries to treat metastatic tumors, and the constantly nagging worry of what might surface on her quarterly CT scans. But despite Kristin’s journey long and arduous journey with colon cancer, she has much to celebrate.